What Happens if Your Chase Account is Negative For Too Long 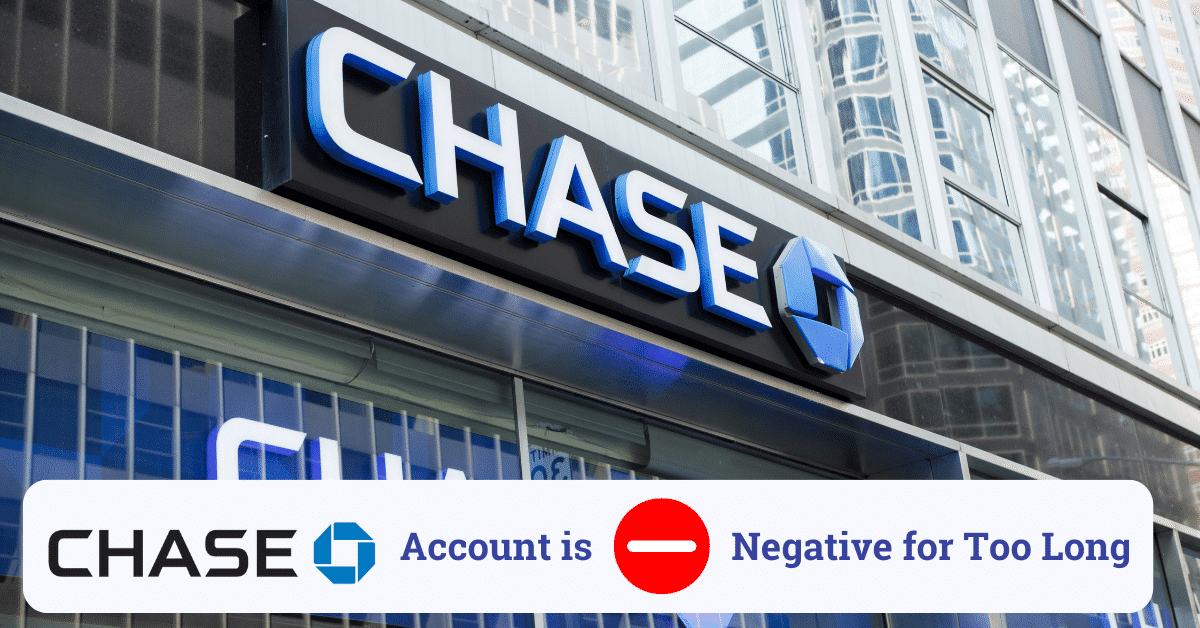 Nobody wants to overdraft their checking account, but life happens. Automatic bill payments, missed deposits, and checks that don’t clear in time can bring the best of us down into the red.

But what will Chase Bank do if your account is negative for too long? In fact, how long is too long? Most of us have probably slipped into the red before, but haven’t had our accounts closed on us immediately.

Luckily, Chase has a very lenient overdraft policy. They work hard to make sure each customer has a hard time getting into the negative and an easy time getting out. If you’re wondering how long you can be in the negative, and how negative you can be before you see any consequences, look no further!

Today I’ll be covering what exactly will happen if your Chase Account is negative for too long.

Will Chase Charge You Fees if Your Account is Negative for Too Long?

Like I said earlier, overdrafts happen. Our bank accounts are connected to so many things at once, it’s no wonder so many of us have a hard time managing them. Chase gets this, it’s actually one of their first points on their website when they talk about overdrafts.

While a lot of banks are discontinuing overdraft fees, Chase still charges them. If you overdraft your account more than $50 and don’t bring it within that dollar amount the same business day, Chase Bank will charge you a $34 overdraft fee, with a maximum of 3 overdraft fees charged per day.

Other than the initial overdraft fees, if you’re negative more than $50, Chase Bank doesn’t have any other fees for being in the red. Online, other websites will tell you that they do (some of the top ranking websites claim they have a $15 fee).

Chase didn’t have this fee when I worked there, but I called an old branch and the customer service line, 800-935-9935, to confirm. And confirmed I was! If you overdraft your account for a long time, you’ll only see the initial $34 fee for overdrafting, again if it’s more than $50.

If you want to know more about Chase’s overdraft policy, you can check it out here.

Unfortunately, fees aren’t the only thing to worry about if you keep your accounts in the negative for an extended period of time.

Can Chase Close Your Account if it’s Negative for Too Long?

Like I said, fees aren’t the only problem you’ll face if you don’t bring your account into the positive.

Chase Bank, like all financial institutions, reserves the right to close your account if you’re in the negative for too long. I wasn’t sure what the exact time frame was — what too long meant exactly — so I asked!

After speaking with some current representatives of the big blue bank, they told me you have 60 days to bring your account into the positive before they close it out.

It’s not 60 days for everyone though, In Chase’s Deposit Account Agreement, on page 21, they stipulate that “You or we can close your account at any time, for any reason, without giving prior notice.” Strict stuff.

From my experience, Chase won’t close your account just because you’ve been in the negative for a month or so, depending on your history with the bank. If it’s your first time in the red, Chase gets that life happens and they’ll usually give you the full 60 days to try and bring your account back in the green.

If it isn’t your first rodeo, Chase will be much less lenient. I’ve seen them close delinquent accounts as soon as 3 days after the account has been overdrawn! This is a pretty rare case, but it is indicative of a bank who knows their customer’s patterns and history.

While Chase is a smart company, they’re not alone in their line of thinking. Every bank maintains a similar policy. Furthermore, each of the major banks is connected to each other through consumer reporting agencies.

Consumer reporting agencies, or credit bureaus, keep track of your history as a customer to any and every major bank. If you’ve had too many accounts closed at Bank of America because of a rough history with overdrafts, other banks will want to know about it.

And they will. While each bank is in competition with each other, nobody wants to open an account for a bad egg. I can tell you personally, nothing is worse than to work with a customer for hours, get paid for my work, and have the account closed and my commission taken back from me.

Thankfully, the consumer reporting agencies are great at communicating with all the banks. As a banker, before I could open an account for a potential customer, I had to get their social security number and run it through Chase’s system. Chase would then communicate with the credit bureaus and look for the hopeful customer’s previous history with other financial institutions.

If their history was good, so were they. I could open an account for them like normal. If it wasn’t though, Chase may only allow them to open one of their more regulated accounts or would deny them service out right.

Again if I can talk from experience, there’s nothing more awkward than setting an appointment, meeting with a customer, entering their info in, and having to deny them service because their banking history is bad.

Don’t let this happen to you! Having an account in the negative is so much more than the $34 fee with Chase Bank. If you leave your account in arrears, it could negatively affect your future with every other financial institution around.

What is Chase Bank’s Overdraft Assist?

Here’s a crazy stat: according to npr.org, all banks located in the U.S. make a cumulative $15 billion a year from overdraft fees. Here’s an even crazier stat from the same study: of that $15 billion, 80% comes from just 9% of customers!

What I’m trying to point out is that banks don’t really make their money from overdraft fees. They use them as a deterrent against customers who may spend more than they have. And by these numbers, it works for 91% of all bank customers! (Not to brag, but I’m in the 91% myself!)

While Chase Bank hasn’t eliminated all of their overdraft fees, they have introduced the new Overdraft Assist program to help their customers avoid them. The program is simple, if you’re overdrafted by less than $50, you won’t be charged a fee.

Better yet, if you are overdrafted by more than $50 but bring it within the $50 threshold before the business day is over, Chase again won’t charge the $34 fee. If you do cross the threshold, but your transaction was less than $5, the fee won’t be charged.

Chase Overdraft Assist doesn’t require enrollment and comes as a free feature with most standard checking accounts. I say most because student and minor checking accounts can’t be overdrawn anyways.

Like any bank or credit union, Chase Bank doesn’t want their customers to stay in the negative too long. They’re not totally strict though. With the Overdraft Assist program, Chase has made it harder than ever to venture into the negative.

As a thank you for reaching the bottom of my wonderful article, I’ll give you a tip from an ex-Chase banker: if you do find an overdraft fee on your account, don’t be afraid to call the service line or your local branch to try and get it refunded.

Again, Chase doesn’t rely on funds coming from overdraft fees. They also want to retain most of their customer base, so if it’s your first time seeing the $34 charge on your account or at least the first time in 12 months, they’ll probably give you a refund (if you’re nice).

You may find helpful: 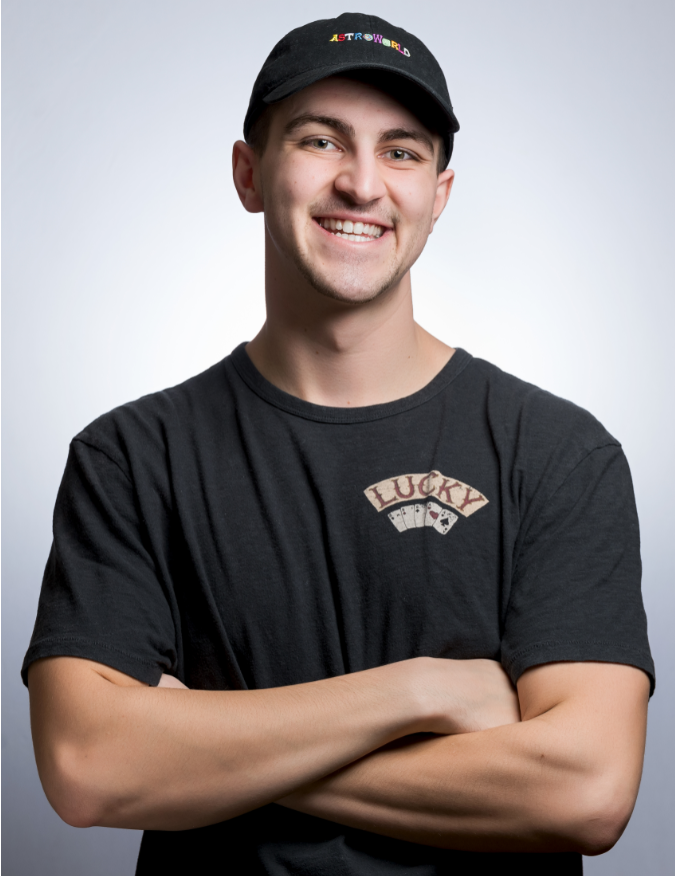 Branson Knowles is a former banker and current writer at TopMobileBanks.com.

During his years banking, he helped his clients discover their financial freedom through smart savings and spending goals. He started as a teller before becoming a banker and obtaining his federal licenses, furthering his clients’ on their financial journeys.

After becoming one of the top producing bankers in the state, Branson decided it was time to pursue his own financial freedom. He started writing freelance finance articles before joining TopMobileBanks.com, breaking down banking like only an ex-banker could.