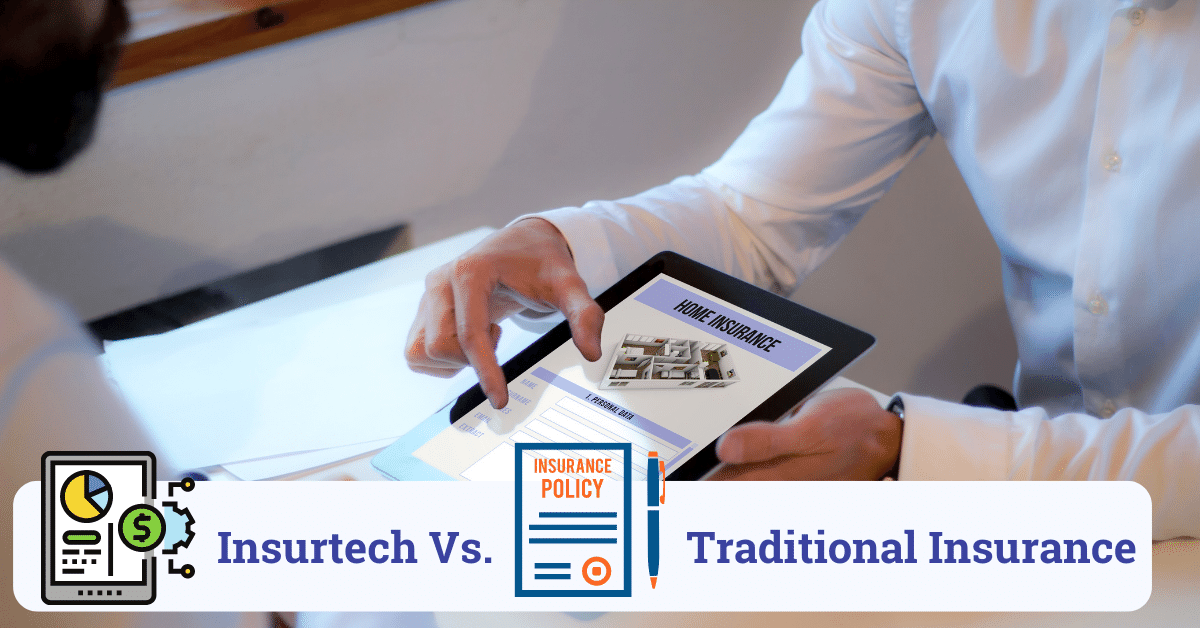 The tech revolution has improved many areas of our lives. The way we communicate and bank come to mind first. So, why should insurance be left behind? Luckily, it isn’t as insurtech is the new game in town.

Insurtech is to the traditional insurance industry what fintech companies are to traditional banks. There’s no way of beating convenience, and that’s why many conventional providers are joining the game.

In this article, we’re going into detail about insurtech, its pros and cons, and comparing it to traditional insurance.

Insurtech (insurance + technology), similar to fintech, is looking to disrupt a traditional industry that hasn’t offered anything new for what seems to be decades.

Using technology, insurtech is offering highly customizable policies that are priced using new streams of data to give personalized premiums instead of using standardized charts with old data.

These insurance startups have a lot going for them in terms of costs, customer acquisition, and user experience. Shopping around for insurance can be cumbersome, and applying for one is even more so.

For these and other reasons, insurtech has hit the ground running as customers are more than ready to embrace a digital-only insurance company that requires much less paperwork and offers a tailored experience.

How Does Insurtech Work?

Insurtech is a product of modern times when customers are so used to getting things with a couple of taps on the smartphone screen. However, people often don’t realize how much work is needed in the background to bring you these offers, products, or services.

Of course, we’re not talking about manual work anymore, but AI and computers. Real data, coupled with machine learning and algorithms, work to get you the right policy at a fair price.

This is in stark contrast to statistical models and blanket risk categories that encompass vastly different people just because they’re of the same age and gender.

Insurtech is attacking this data and analysis issue head-on by using information from all kinds of devices, such as GPS trackers in cars or activity trackers on our wrists, just to name a few.

Using these data inputs, insurtech companies are building more finely outlined groupings of risk, allowing for the products to be priced more competitively and fair.

Why is Insurtech Important?

Insurtech and fintech are important because of the competition they bring to these old industries that haven’t changed in a long, long time.

The insurtech startups have many advantages, as you’ll see below, but none are as important as the following – disruption.

No one is really satisfied with the existing system and incumbent insurers. They are expensive, offer the same products, and are often very reluctant to pay out claims.

This is what happens when there isn’t real competition out there, and billions of people are guaranteed to need insurance many times throughout their lives.

So, without insurtech, the premiums would continue to go up, and customers would keep getting subpar service and insurance products.

One of the main advantages of insurtech policies is that they are cheaper than traditional insurance policies. That’s because insurtech companies have much less overhead in terms of offices and sales reps, among other things. Everything is online and requires much less manpower.

They also, generally, tailor their policies to you and you only. For instance, getting car insurance with an insurtech company such as Root means that your rates are determined mostly by how you drive and, to a lesser extent, by how old you are or what gender.

You get a quote by taking a test drive with a Root app on your phone that tracks your movement and driving habits for a couple of weeks.

However, because insurtech companies have direct information about you, they are more likely to decline you. If you are accepted, though, you will get much lower rates.

If fintech companies do one thing well, it’s that they streamline the user experience from the sign-up to the usage phase. Opening a digital bank account, for instance, couldn’t be easier, and using the mobile banking app is as easy for 7-year-olds as it is for 97-year-olds.

Insurtech has done the same for the insurance industry, and getting a policy is oftentimes a much better experience, even though it might include direct data from the potential client.

Talking about streamlining the process, paperwork is a thing of the past because of big data and machine learning that lets these startups gather data about you even before you think of getting a policy.

Therefore, the companies only need the most basic details from you, and the rest will be figured out by the A.I. This process is also incredibly faster than what old school insurers are doing.

READ NEXT: 4 Ways How Does Fintech Change Real Estate (With Examples)

Classic insurance companies work with data that goes back decades by sorting clients into groups by their risk category. These groups are also very broad, and because of that, some people end up paying more for their policies than they realistically should.

On the other side, insurtech is using real-time data and not relying entirely on statistical models and thus creating smaller and much more tailored risk categories. As we already mentioned, it’s one of the reasons why they can offer a more competitive pricing strategy.

Not only are insurtech companies in the health and life insurance industries using wearables to decide which policy and for how much money is right for you, but they can also reward you with discounts and perks.

This is unparalleled customization that obviously skews heavily towards people that are healthier and take care of themselves much better. They will pay much less for insurance than overweight couch potatoes, for example.

Will higher premiums entice people to take care of themselves, or will this make access to insurance even worse? I’ll let you be the judge.

All of the reasons mentioned above are the advantages of insurtech that make it more competitive than traditional insurers. It’s more accessible, cheaper, digital, mobile, you name it, it’s got it.

Although there’s a greater risk that you might be rejected by an insurtech company, there’s less chance that you will be paying through the nose if accepted just because you’re in a high-risk group on paper. And that is enough for a lot of people to apply.

The world of insurance is marred by a lot of red tape, and rightfully so. However, just as fintech startups had to navigate their way through their fair share, the same is true for insurtech.

The regulation is a bigger issue than it sounds because many insurtech startups require the help of traditional insurers to manage underwriting and catastrophic risk.

Nevertheless, as insurtechs get millions of clients because of their refined and streamlined model and user-friendly approach, many incumbent insurers will warm to the idea of insurtech and invest and cooperate with them. Thus making life easier for the new guys as well.

Because insurtech offers such a tailored insurance product backed by real data, there are going to be a good few clients that will get declined. That is, of course, unfortunate and may deter many people from even giving insurtech companies a try.

This is something many traditional businesses haven’t even mastered yet. The issue seems to be even worse for fintech and insurtech companies that often lack the people power to effectively cover all the customer inquiries in a positive way.

Hopefully, companies get better at this because it’s a very frustrating thing to be talking about in this day and age still.

The insurance industry is hundreds of years old, and many existing insurance companies were founded decades and decades ago. That means that many of them are, by now, almost too big to fail.

Even though insurance companies rarely go bust, in the event one does, the policyholders are protected by state governments and state insurance regulators. In the case an insurance fund fails, the policies will be transferred to a stable insurance fund.

Most people also tend to trust traditional businesses more as they have brand recognition and reputation. It can be harder for new insurers to penetrate the market in a meaningful way.

Conventional insurers have a lot of overhead that insurtech don’t have. Physical branches with hundreds or even thousands of sales agents and underwriters, clerks, actuaries, claims adjusters, analysts, loss control specialists, and of course, managers. This all costs very, very much.

The cost of doing business is transferred to clients, of course, and therefore, policies of traditional insurers cost more. For most people, premiums are rising all the time instead of falling.

That makes no sense if you have a perfect track record and fall in a group with less risk. However, here we are, paying through the nose year after year.

Conventional insurers have a complicated process for determining the risk they take on and quantifying it into dollars. That can be a slow process with plenty of paperwork and some exams.

In the end, it’s highly likely that the figure you’ll have to pay will leave you unsatisfied, and therefore you’re likely not to recommend it to others or even actively discourage people from going to that insurance company.

The Future of Insurance

So, as we’re repeatedly saying, the insurance industry is facing a rare earth-shattering event. This time, it’s not their clients that are facing a catastrophic event, but the companies themselves and the system they’re a part of.

By some estimations, there will be up to one trillion connected devices as soon as 2025. This wealth of data will enable insurers to provide personalized pricing, new product categories, and real-time service delivery.

Getting an on-the-spot quote for driving your friend’s car, for example, will be a breeze.

Next, for almost all personal and small-business insurance products, underwriting, as is now known, will stop existing and be replaced by automation backed by machine learning.

The claims process will change drastically as well as most of it will be completely automated. The best example is a car accident where a policyholder takes a streaming video of the damage on the spot, which is automatically translated into loss descriptions and estimated amounts.

Insurance is yet another industry that is finally being disrupted by technology companies that recognized a once-in-a-lifetime opportunity. And because traditional insurers are often awful, it’s very easy to “steal” customers from them, especially the younger demographic.

As time goes by, incumbents are going to try and catch up. But will it be too late? Only time will tell.

The insurance industry is at a crossroads, and it will be interesting to follow as it’s going through its transformation that has already begun.

A.I., machine learning, big data, IoT – these aren’t just buzzwords people are throwing around. These technologies have real-world applications and are already influencing our way of life.

We’re already living in a sci-fi movie, we’re just not recognizing it because we’re the proverbial frog that’s getting cooked alive, but very slowly.