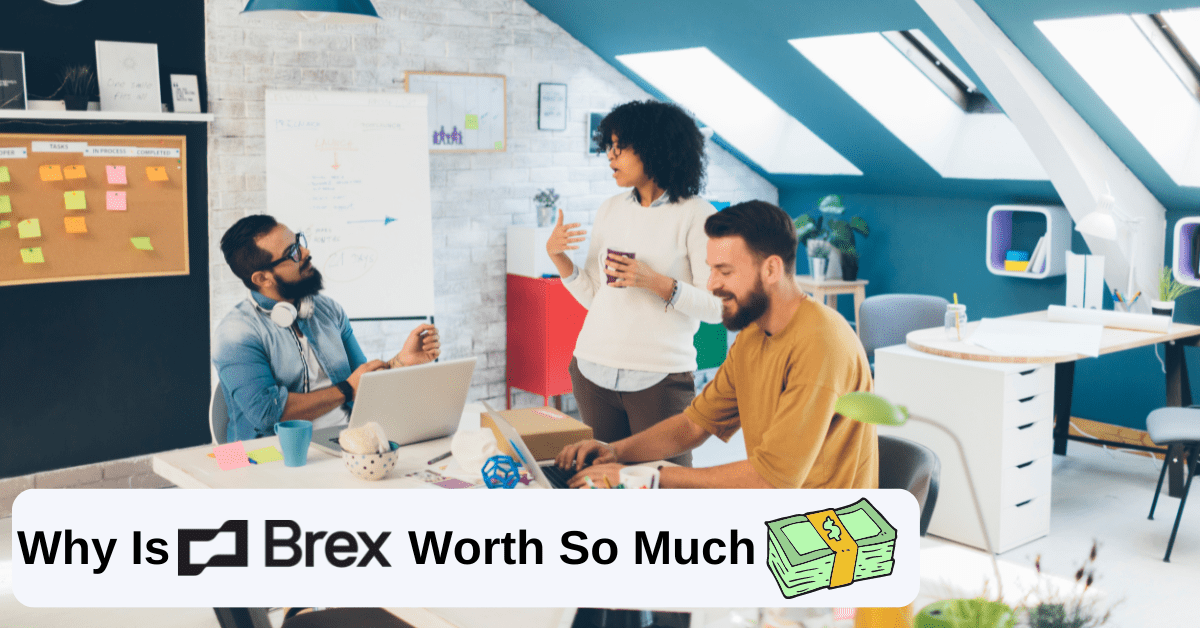 It seems that Brex is in the headlines every couple of months with another spectacular valuation. At the time of writing, Brex raised $300 million from its existing investors TCV and Greenoaks Capital at a valuation of $12.3 billion.

You’re probably here because you’re confused as to why a relatively new digital bank is worth that much. Plus, they recently announced they’ll be scrapping tens of thousands of businesses.

So, why does Brex have such a high valuation, and is the darling of Silicon Valley and VCs? Here’s the short answer.

Brex has been able to attract tens of thousands of startups, as well as SMBs, in a short amount of time. That put them on the map for investors and made it easy for them to get huge amounts of money at high valuations.

Let’s dive a bit deeper into the reasons behind this incredible growth and what Brex will be focusing on in the future. But first, here’s some background on the company.

Like other digital banks, Brex set out to challenge the status quo, “steal” customers from incumbents, and gain new customers by offering a modern, faster, less expensive, and all-around better banking experience.

Brex is a fintech from San Francisco that was founded in 2017 by Brazilians Henrique Dubugras and Pedro Franceschi who previously founded an online payments company, Pagar.me.

It’s quite interesting that Brex started out as a VR startup and not a fintech. However, three weeks into Y Combinator’s accelerator program, the duo pivoted into what they do now. Talk about the right decision.

Accurately recognizing that the riches are in the niches, this startup focused on other startups by offering them and SMBs corporate cards and earning money on interchange fees.

Since then, the company has shifted its focus to a “financial operating system” for companies. A holistic approach to banking, if you will.

They also announced a big push and marketing spend to attract SMBs, only to drop them altogether if they don’t have “professional” funding. That means that without venture capital, angel money, or funding from an accelerator, you’d no longer be eligible for Brex. More on that below.

Why is Brex Worth so Much?

The company’s founders realized very early how hard it is to secure financing or even business accounts from traditional banks. What started out as a virtual reality company soon pivoted into a business credit card and digital bank thereafter.

They set out to give cards to startups by not simply looking at their credit scores (like old-school banks do) but by taking into account the amount of money raised, revenue, and cash balance.

Taking into account these metrics when deciding a company’s eligibility for their card makes Brex stand out.

Brex will consider how much cash an applicant has on hand. If e-commerce is low on cash because of constantly buying inventory, Brex will focus on its revenue. If the company doesn’t have revenue and hasn’t raised cash, Brex will review credit scores.

You get it. If you have at least one of these aspects going for you, you could get a business card.

That way, aspiring tech companies could get a business expense card from a company that understands the situation they’re in. Perhaps most importantly, they wouldn’t have to personally guarantee any debt they can’t pay off that’s been pilled on the card.

Brex was unique in doing all of these things to help out and attract new users. Startups started applying in droves, and the company hired hundreds of new employees to accompany the growth.

This makes it extremely attractive to investors, and for that reason, Brex has no problem getting hundreds of millions of dollars at a time at ever-growing valuations.

But there are other reasons why Brex has so much potential. As of 2022, Brex is making a push to diversify its money-making from interchange fees to recurring revenue from subscriptions to its software.

Brex is now more than a mere card. It’s a one-stop shop for startups offering the following products:

All of the above comprise a single dashboard and are part of a service called Brex Premium that costs $49 per month.

One of the first customers of this platform was DoorDash. The software platform will help them reduce overhead and bureaucracy as well as “enable a culture of trust and financial discipline at scale.”

Only time (and investors) will tell if this renewed and exclusive focus on startups helps Brex keep this high valuation and continues to be the Silicon Valley darling.

Who is the CEO of Brex?

Brex CEO position is filled by the two cofounders – Pedro Franceschi and Henrique Dubugras. The two Brazilians are some of the youngest billionaires in the Forbes ranking as of now.

As already mentioned, the duo are also founders of Pagar.me, a virtual payments company helping to increase sales conversion from online stores.

They sold that company in 2016 to Stone, a huge, $19 billion startup and one of the largest payments companies in Brazil, for “tens of millions.”

Who Are Brex Investors?

Brex has directly raised more than $1.2 billion from investors, along with more than $300 million in credit lines from Barclays and Credit Suisse. For a total of $1.5 billion dollars making up its valuation of $12.3 billion in 2022.

Why Did Brex Drop SMEs?

Brex shocked SMBs that had accounts with them when in June 2022, the company announced they’d be focusing on startups and scaled businesses and not SMBs.

What that effectively meant was that these companies’ accounts would be closed in less than two months – on August 15, 2022, if the companies didn’t meet one of the following:

Basically, if you’re just beginning your journey as a company, you won’t be able to use Brex without an investment.

This obviously left many business owners pissed and scrambling for new accounts, as well as changing payment details on an endless amount of accounts.

The simplest explanation for why this happened is that Brex chose, somewhat suddenly, to focus on bigger VC-backed clients. Startups are definitely scared of the latest shift in market conditions that have seen many startups’ valuations plummet by staggering amounts of dollars.

Small-time, un-backed companies were seen as a weight around the neck for Brex. The rising number of clients also brought up customer service woes for the company, and they basically had to choose who to focus on.

Brex has many things going for it. Capable founders, an expanding team, venture capital, and a never-ending market of new startups looking for bank accounts are what fuel this fintech and make it worth so much pre-IPO.

With a somewhat controversial move of dropping SMBs, the company got some bad press and plenty of bad reviews from small businesses that were forced to exit in a short amount of time.

For all the reasons mentioned above, it seems that this year will be a crucial year for the company, and we’ll see if it comes out on top in spite of market disruptions and the looming recession.