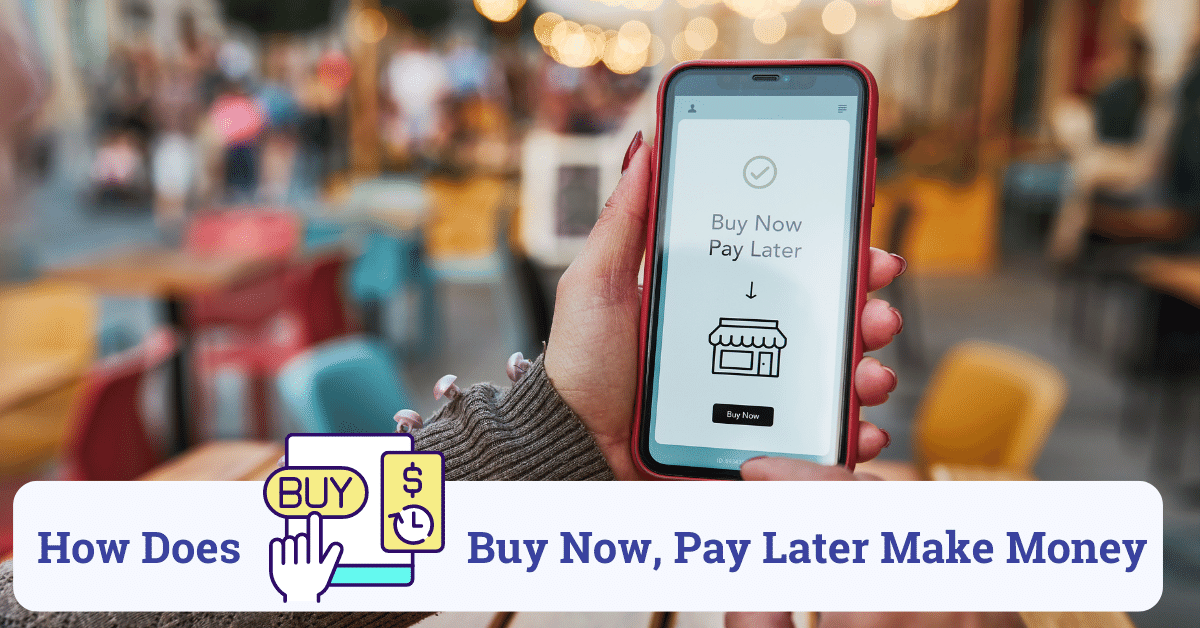 The Buy Now, Pay Later model has taken over e-commerce and is even having an impact on in-store sales. The amazing fact is that most, if not all, BNPLs have no interest rates (for their short-term payments), yet there’s seemingly no shortage of companies on the market.

And rightly so, because by the 2030s, the global Buy Now, Pay Later market is projected to be worth a couple of trillion dollars.

So, how is it then that these Buy Now, Pay Later companies are making money? Here’s the short answer.

Buy Now, Pay Later companies make the vast majority of their money from interchange and merchant fees that are between 4 and 10% and are taken from merchants every time you buy something.

There are some additional ways BNPLs make money as well. So, let’s dive a bit deeper and see exactly how it all works and how it compares to credit cards.

The number one way of making money for Buy Now, Pay Later are merchant fees that they charge e-commerce stores and other retailers that join their program.

Affirm, one of the leading Buy Now, Pay Later companies, made 44% of its revenue from these fees. And Afterpay made $911 million out of its total revenue of $924 million in 2021 from merchant fees.

So, obviously, some companies rely on these fees more than others. Nevertheless, they make the bulk of these companies’ profits.

Some BNPL companies offer virtual or even physical debit cards that shoppers can use to buy mainly online. Some are disposable, meaning that you get a new virtual card for every purchase, while others are more permanent.

Whenever you use one of their cards to buy something, they will charge the retailer a fee. This interchange fee is the backbone of digital banks and their main way of making money.

Interchange fees are smaller compared to merchant fees and are in line with credit and debit card fees because they are issued by Visa or Mastercard. That way, when you use this card to buy something, Visa collects the fee from the merchant and splits it with your BNPL.

Why do Buy Now, Pay Later companies issue these virtual cards? Because with a virtual card, you can pay over time at even more retailers than you would normally. Even if the retailer isn’t enrolled in the BNPL, with one of these cards, you can pay later.

Buy Now, Pay Later services are often seen as completely fee-free ways of shopping. Although that is true to some extent, some BNPLs make a considerable amount of revenue from interest loans.

BNPLs are free in the sense there’s no opening or registering fee. Most companies don’t even charge loans for their normal Buy in 4, Pay in 3, or Pay in 30 Days products.

Some of them charge late fees and interest if you miss a payment. Those can add up and earn them some money.

However, BNPLs such as Affirm offer installment plans at a personalized APR for loans for up to 60 months. That’s very much similar to a traditional bank loan but with much less paperwork, instant approval, and completely online.

Affirms interest rates for these types of loans are between 0 and 36% APR. They also require hard credit checks, and you may not be approved for a loan if you have a bad credit score.

The revenue from interest for Affirm accounted for 37% of the company’s revenue in the fiscal year 2021.

Other BNPLs like Klarna also offer more financing options, but Afterpay, for instance, doesn’t have this model (for now), and therefore it doesn’t earn money that way.

A number of BNPLs sell some of their loans to investors. Although the companies could also lose money on these deals, mostly it’s a win-win situation for them.

BNPLs often have complex business models and are creative when it gets to funding loans.

READ NEXT: 10 Most Asked Fintech Questions Answered (In Detail)

Buy Now, Pay Later services often have millions of users, which means they can leverage this audience for more ways of earning money. It could be through referrals to merchants who gain even more customers if they are present in a BNPL app.

Selling ads, data, or both to advertisers are also some of the ways these companies can earn money indirectly from their customers.

People often compare Buy Now, Pay Later offers to credit cards. And rightfully so. Both products are convenient and widespread. Although it might seem that Buy Now, Pay Later is a new product, it has been around for a very long time.

The only difference now is that it’s completely mobile, and younger generations took notice of it.

So, how similar or different are these two popular financial products?

BNPL is much simpler with a clear installment plan and easy-to-pay installments. You can shop and pay through the app or go to retailers’ websites and pay with BNPL at checkout.

There’s no interest, at least for basic BNPL plans, and hardly any late fees. There isn’t a revolving line of credit but a set amount that you’re approved of.

There’s also some flexibility in choosing the repayment model and no annual or enrollment fees.

Credit cards also charge compounding interest, or interest on interest. It’s a quick way to dig yourself into a hole.

For now, BNPL loans don’t hurt or help your credit score. However, times are a-changin’. Credit bureaus have had reports for some BNPL accounts but not the newer short-term ones we’re talking about here.

Soon, however, they will include details of any short-term BNPL deals you take out, so lenders have an exhaustive picture of all your credit obligations, according to Experian. “This helps them accurately assess your financial circumstances and your ability to manage any further borrowing.”

As it stands now, Buy Now, Pay Later companies only perform a soft credit check for a short-term loan, for example, Buy in 4.

Longer loans of up to 60 months may require hard credit checks that can impact your credit score.

If a company is reporting your payments to credit bureaus, that may help your score if you’re paying on time or hurt it if you’re late or are missing the payments.

Every purchase you make with a Buy Now, Pay Later is regarded as an independent account on your credit report that gets closed once you pay off the balance.

How Much Do Buy Now, Pay Later Companies Charge Retailers?

The Buy Now, Pay Later model comes at an expense to retailers and merchants that are a part of the program. As we already determined, merchant fees are where the BNPL companies make the most money.

It’s no wonder when we find out that between 4% and 10% of the purchase price goes to the BNPL provider.

In a world where merchants are always complaining about the 2-4% interchange fees for card transactions, paying up to 10% is probably not going to last for too long, as regulators will probably limit them the same as they did with interchange fees.

Why on Earth would merchants accept these exorbitant fees that could hurt their bottom line? Well, according to RBC Capital Markets, having a Buy Now, Pay Later option at checkout increases the conversion rate by a whopping 20 to 30 percent.

That means less cart abandonment because the item is too expensive and even lifting the average ticket size by 30 to 50 percent.

To recap, a customer browsing an e-commerce website is more likely to buy something if they see the Buy Now, Pay Later option, and they will buy a more expensive item instead of the cheaper model because they can now afford it more easily (or so they think).

Buy Now, Pay Later offers are also very much focused on the younger demographic that distrusts credit cards, so retailers that have a younger user base can profit even more, in spite of the higher merchant fee that they are hit with.

Here are the benefits for merchants of using Buy Now, Pay Later:

Is There A Penalty For Paying Off Early?

There are generally no fees for paying off your short-term Buy Now, Pay Later loan early. However, the installments are often so close to each other that it doesn’t make much sense to pay something off early, as you will pay it off by default in a couple of weeks anyway.

There also isn’t any benefit to doing so, except maybe being able to have peace of mind and not thinking about payments anymore.

Who Uses Buy Now, Pay Later The Most?

It seems that Buy Now, Pay Later services have seen their peak during the pandemic. At least for now. 50% of American people admit to using one of these services, which is down from 56% the year before.

Buying electronics is the most common way of using BNPL. In a survey, 47% of respondents said they’d used it for that reason.

Buy Now, Pay Later is a popular payment method that no self-respecting merchant is skipping. It has proven benefits for their business in spite of the high merchant fees that they’re paying to BNPLs.

On the other side, Buy Now, Pay Later companies were making a killing during the pandemic, however, it seems that the growth has somewhat slowed down due to high inflation and recession fears.

This downturn will force these companies to become leaner and revise more ways of making money apart from the ones we mentioned in the article.

The ones that aren’t offering debit cards should begin to do so, and the ones that don’t offer more types of loans apart from their basic short-term ones, should also branch out.