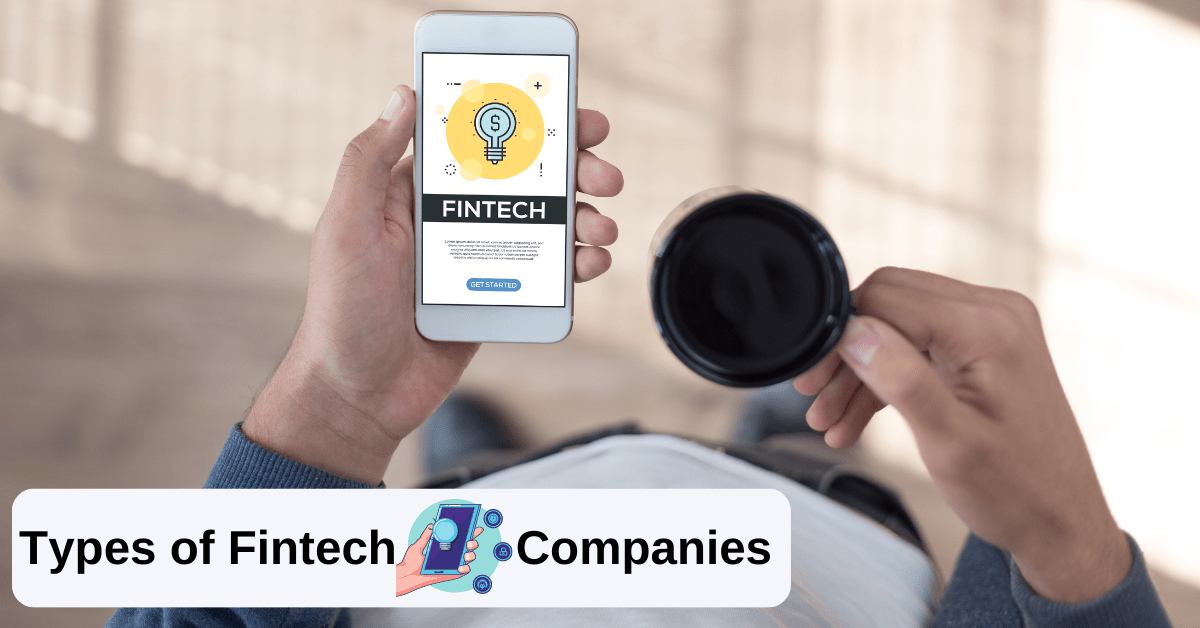 Most people think that all fintech startups are the same. However, there are many differences between them. The types of fintech companies include the following:

There are arguably more fintech companies in this group than any other. And while some other categories could fall under this group, it’s best to separate them because digital banking is such a broad term.

Fintech companies started disrupting traditional banking in a major way after the great recession of 2008. However, around 2014/2015, things really started picking up as many, now established digital banks were launched.

In the UK, Starling Bank was founded in 2014, and Monzo and Revolut in 2015. Combined, these three digital banks now have tens of millions of customers, and Revolut has gone global, disrupting traditional banking wherever it appeared.

Digital banks threw a wrench into traditional banking by making it incredibly easy to open an account by simply applying online with minimal documentation.

They usually also don’t have a monthly maintenance fee, make it easy to transfer money, have robust budgeting and analytics built in, offer cashback, and have higher savings interest rates.

But above all, they have sleek mobile apps that allow users to perform everyday banking right from their smartphones.

READ ALSO: This is How Big Banks in the US Adjusted to Digital Banking

Although mobile payment apps technically fall under digital banks, there are some differences that warrant putting them into a separate group.

The most notable fintech mobile payment companies would be Cash App, Venmo, PayPal, Zelle, Block (Square), and others.

But by far, the largest and most popular mobile payment app and digital wallet is Alipay by Ant Group. More than 450 million people use it to spend, send, and receive money.

Mobile payment apps mostly rely on QR codes as a simple way of paying for things and services and your smartphone’s contact list for sending money to friends and family.

Some apps, such as Venmo, made what is basically social media, as everyone can see how much money you are sending and for what purpose.

Although there are some privacy settings, it hasn’t deterred most people from using it, in fact, younger people are what drives its incredible success.

Next, there are fintech companies focusing almost solely on international money transfers. They are disrupting this very traditional industry by offering faster, cheaper, and more convenient money transfers to almost every corner of the earth.

Conventional companies operating in this space were post offices, banks, and private companies such as Western Union, which was founded in 1851 and pioneered wire money transfers.

Today, some of the most popular fintech international money transfer companies are:

What separates them is the transparency and no hidden fees. You get to see upfront what you’ll be charged for the transfer and exactly how much the recipient will receive.

Not to mention that you can transfer money from the comfort of your own couch in just a few minutes.

Investing has gone through a real renaissance in the last ten years or so. Gone are the days of expensive trades conducted over the phone by your costly financial advisor.

Today’s traders are often twenty-somethings buying and selling fractional shares for free on their smartphones.

The company that almost singlehandedly popularized this kind of investing was Robinhood. They introduced commission-free investing to the masses by allowing people to build their portfolios for as little as $1.

On the other side, we have extremely popular robo-advisors that offer advice and trades on the behalf of the investor using their survey responses, algorithms, and mathematical rules, all without human intervention.

The most notable fintech companies in this space are:

Robo-advisors have turned the wealth management and financial advisor industry on its head and are helping people save, invest, and grow assets while minimizing the risks.

The traditional insurance industry was also on the chopping block and fintech startups known as insurtech companies shook the incumbents to the core.

Insurtech startups don’t rely on decades-old standardized charts that are, more often than not, unfair for most people.

Instead, the new companies use technology to offer highly personalized insurance policies that are priced according to AI, big data, algorithms, machine learning, and real-time information.

Because most tasks are automated, fintech companies in the insurance industry don’t need hundreds or thousands of employees, thus keeping their costs low and managing to offer lower premiums than their old-school competitors.

The flip side is that because insurtechs have more accurate information, more people tend to get rejected and deemed unsuitable for their insurance as a way of minimizing the risk for the companies.

In the real estate industry, fintech companies are called proptech and they changed the way things are being done by simplifying the mortgage process, providing real-time instead of retrospective data, reducing manual work with automation, and dealing with risk better.

Well-known fintech companies that are disrupting real estate are:

Proptech companies still have a long way to go and they can learn a lot by researching how fintech companies unsettled brick-and-mortar banks and forced them to spend a lot of money and time to adapt to the new reality.

Regtech (regulatory technology) companies are looking to solve challenges and problems arising from a tech-driven economy. These challenges could be money laundering, data breaches, fraudulent activities, cybersecurity, and any other financial risk, as well as regulatory compliance.

Regtech works with other fintech companies but also with big banks and even government agencies.

Some well-known regtech companies include:

SymphonyAI Sensa, or Ayasdi, as it was formerly known, used its machine learning tech that was initially developed for defense agencies to help big banks prevent money laundering and analyze the market and risks for them.

When it worked with Citigroup, it enabled them to pass stress tests from the Federal Reserve.

Although there has been some deregulation happening in the US since 2018, with so many fintech companies cropping up every year, there will be an endless amount of work for regtech companies.

We already touched upon lending a bit when talking about proptech. However, the lending industry is much more than mortgages, and fintech companies have penetrated every pore of the lending space.

Although some digital banks offer lending products and services as well, it’s the specialized fintech companies that have taken the market by storm.

One such example is the LendingClub which has been around since 2007 and has reportedly helped more than 4 million of its members.

This full-spectrum marketplace offers a broad range of financial services at lower prices than traditional lenders.

On the other side are so-called Buy Now, Pay Later fintech companies that offer financing that’s more flexible than credit cards. With easy approvals and no interest.

These types of fintech companies have exploded in popularity in recent years and have opened up a whole new untapped market that’s going to be worth tens of billions of dollars in the near future.

You can’t escape cryptocurrency talk these days. People either love them or hate them, but the fact is that there are thousands of them on the market at the moment.

Most of them aren’t good for anything but for taking people’s hard-earned money, and others are straight-up scams.

Even the most popular cryptocurrency – Bitcoin, has many problems, such as wasting unbelievable amounts of precious energy, wild swings in valuation, and not many real-world applications.

That being said, there are arguably tens of thousands of fintech companies in the cryptocurrency space. Many digital banks also offer bitcoin or crypto marketplaces where you can buy and sell cryptocurrency.

Most people still don’t understand what blockchain is and the term is still very much connected to cryptocurrencies more than with anything else.

Blockchain companies often try to reinvent the wheel and offer “solutions” to “problems” that often don’t exist. There may be some merit to the blockchain, but only time will tell.

What is Fintech? (Interesting Facts)

Contrary to popular opinion, fintech has a long history that dates all the way back to 1886, believe it or not, when the first transatlantic cable was laid.

So, what is the definition of fintech? Fintech is a financial industry that uses technology to improve financial activities and services.

Fintech companies are inherently startups, and they need investment capital, and a lot of it, to usurp the markets.

The most popular and talked about fintech companies are often the most funded and are designed to challenge and “steal” customers from conventional financial services providers.

They do so by having much less overhead, being more nimble, having fewer fees, or even no fees at all, focusing on the underserved segments of people, and providing faster, better, and mobile service.

While there are some fintech companies that are trying to be so-called financial super apps, most fintechs focus on one narrow segment of the market, and that enables them to have less cost and be more efficient.

North America yields most of the fintech startups, with Asia a relatively close second, followed by Europe, and South America, Africa, and Australia the last.

There are ten main types of fintech companies. Each of the market segments the fintech startups entered saw a disruption of the status quo and a more modern way of doing business that’s almost exclusively online.

This has led to millions of people getting access to financial products and services they never dreamed of having.