6 Reasons Why Is Buy Now, Pay Later Services So Popular 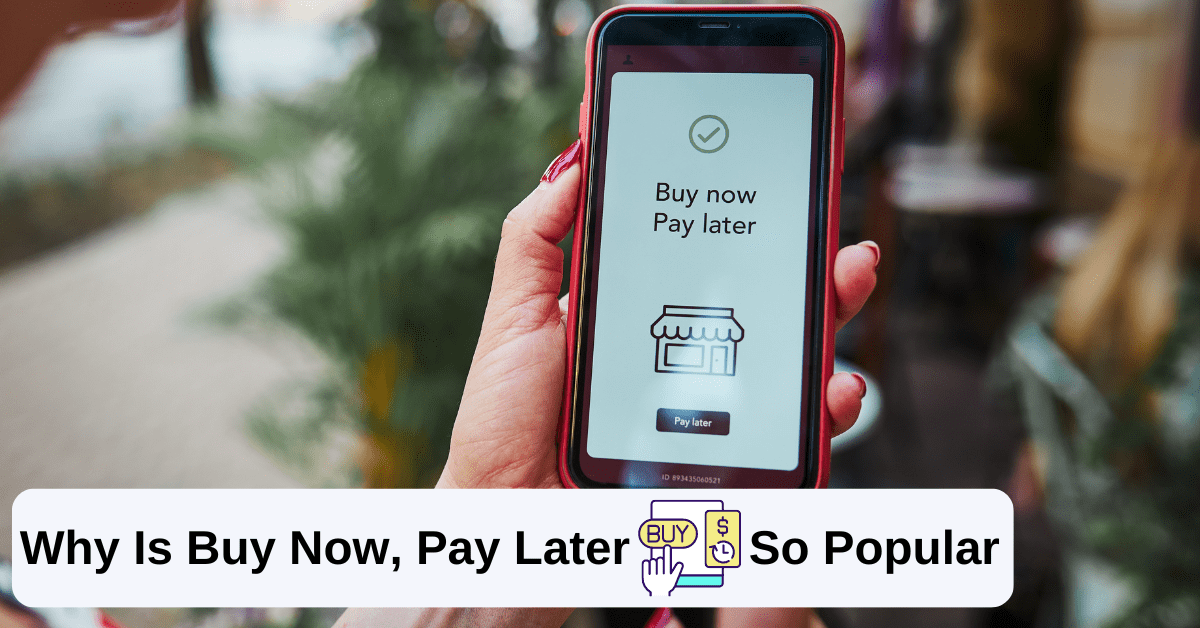 Until recently, the most convenient form of financing was credit cards. However, in recent years Buy Now, Pay Later services have entered the financing market and made a killing.

There are many pros and some worrying cons to the Buy Now, Pay Later model. The service is still very popular, although the market is in a dip at the moment due to supply chain issues and raging inflation.

So, let’s find out why Buy Now, Pay Later is popular. Here’s the short answer.

People love the Buy Now, Pay Later model because they find it’s more flexible than credit cards, the payments are easier to make, the approval is easy, and there’s little to no interest, among other things.

What is Buy Now, Pay Later?

Buy Now, Pay Later, or BNPL for short, is a short-term financing option that lets consumers buy something and pay for it at a later date. It’s special because it’s often interest-free and especially popular on e-commerce websites.

BNPL is basically a point-of-sale installment loan presented to you when you’re at the checkout. You typically have to make an upfront payment, and the rest can be paid off in installments.

The most popular plan is “pay in four” where you pay the first installment straight away and the rest in six weeks. Other models let you pay monthly or everything after 30 days (with no upfront cost).

What’s also interesting about the BNPL model of payment is that it doesn’t affect your credit score, but failing to make repayments could damage it.

Although Buy Now, Pay Later is popular across all demographics, it’s often thought that young people are the most vulnerable to these services. Both BNPL users and non-users think that buying via BNPL is financially risky.

There are many reasons why BNPL is so popular today. However, according to one research, users prefer Buy Now, Pay Later over credit cards because:

Those are all interesting reasons for choosing Buy Now, Pay Later over credit cards. Obviously, if your credit cards are already maxed out, you might reach for BNPL if you really need or want something.

Is this the best solution? Probably not. But it might be the only way out at that moment.

BNPLs offer easy payments through apps where you can enable auto payments for a completely hands-off approach. That way, you’re in less danger of missing a payment and getting hit with a late fee.

People also think BNPL is more flexible, although credit cards are already pretty convenient and can be used almost anywhere.

However, credit cards do have interest rates and late and annual fees in most cases. That’s obviously a huge reason for some, if not most people, to use BNPL instead or in addition.

Some Buy Now, Pay Later don’t even have late fees. That could prove to be a risky strategy for these providers in the long run.

If you’ve ever been rejected by a credit card company, you’ll appreciate how easy it is to get approved by BNPL. You might not get a high line of credit; nevertheless, you can use it to shop.

Contrary to popular opinion of BNPL being reserved for high-priced items, a majority of people use it for items under $50 as well.

What Are The Most Popular Buy Now, Pay Later Apps?

There are plenty of Buy Now, Pay Later companies battling for your money. Some of them are present only in the US, but many of them came or branched outside of the country.

PayPal offers their own BNPL. It used to be called Bill Me Later but is now known simply as PayPal Credit. It’s one of the most popular revolving lines of credit that you can use on millions of websites, and that can be found on eBay, Walmart, Home Depot, USPS, Best Buy, and many others.

It’s by far the most used BNPL service. It’s no wonder since PayPal has hundreds of millions of users, and their credit can be used wherever PayPal is accepted.

This convenient credit line charges interest only if you don’t pay the balance in full within six months. There’s also no annual fee, and the credit decision is brought in a couple of seconds.

Afterpay is the second most popular BNPL service that was recently acquired by Cash App. It hails from Australia and is also available in the United Kingdom, Canada, the United States, Italy, France, Spain, and New Zealand.

The company lets you pay for things online or in-store in four interest-free installments in six weeks. The easiest way to pay with Afterpay is to download the app.

However, since it was acquired by Cash App, it will soon be integrated into the mobile payments app for even more ways to shop.

Affirm is a fintech company that developed this extremely popular Buy Now, Pay Later product. You can select Affirm at checkout online or in-store, download the app and browse through thousands of stores, or use a browser extension.

You can only BNPL interest-free if you pay in four installments. That’s one payment every two weeks. Other payment models, such as monthly payments (6-12 months), incur a 10%-30% APR.

Klarna is a BNPL behemoth from Sweden, serving most of Europe and the US. The company was Europe’s most valuable private tech company until its shares tumbled in 2022, together with other tech shares.

However, that doesn’t take away any of its success. For instance, Klarna handled $80 billion in online sales in 2021.

Same as with most other BNPLs, Klarna has a dedicated app where you can browse and shop.

There are several models of financing, including pay in four and pay in 30 days. It’s nothing revolutionary; however, it is extremely convenient, which is why BNPL is so popular.

Just like Affirm, Zip, also comes from Australia. It also allows you to pay for things and services in four installments over six weeks.

The company acquired Quadpay in 2020 to grow its US operations. Apart from the US and its native Australia, the service is available in 10+ countries.

Pros and Cons of BNPL

As with everything, there are advantages and disadvantages. The same goes for Buy Now, Pay Later. Some people swear by them, while others think they are risky and can lead you down a dark path.

The BNPL advantages are glaring and almost identical to digital banks. After all, fintech companies are the force that drives BNPL and digital banking.

Buy Now, Pay Later services don’t do any credit score checks and have a fast and easy approval process requiring no paperwork. Additionally, there are so many services on the market that you can use more than one at a time.

If you pay every installment on time, there are no hefty fees that you have to be afraid of. And if you worry you’ll miss payments but have no other choice than use BNPL, find one that doesn’t have late fees.

BNPL’s disadvantages, on the other hand, are similar to those of credit cards. It can be somewhat hard to stay on top of payments, especially if you’re using several services.

Naturally, missing or late payments can cost you more money and a bad credit score if you’re continually late.

Many BNPLs have started offering rewards and even cashback but not to the extent of credit cards which are way ahead on this one.

Lastly, because Buy Now, Pay Later is so prevalent, it can be hard to resist buying a high-ticket item even if you don’t have enough money at the moment. In young people especially, this can lead to spiraling debt that can be hard to get out of.

However, the same could be said for credit cards because they’re even more popular and often get sent to your home unwarranted.

Credit cards are much more popular than BNPL. But does that make them better? We’ve seen the pros and cons of BNPL above, and you probably already have a good grasp of how credit cards work anyway.

Which option is the best for you comes down to the individual level. Although some BNPLs offer some kind of rewards program and even some cashback, credit cards are still miles ahead of BNPLs in that regard.

Credit cards also offer other perks like a rental car or travel insurance in addition to not having a fixed installment plan. They can also be used everywhere.

However, for some (most?) people, interest fees can add up if one carries a balance from month to month, and credit card debt can spiral out of control.

Although it has come under scrutiny in recent years, BNPL is easier to have under control, and even if you’re late on payments, you won’t pay hardly any late fees; however, your credit score could suffer.

You can use both services, of course, and some people do. In that case, you should keep an extra eye on repayments, so you don’t miss any.

Just like digital banks, Buy Now, Pay Later companies make their money from transaction fees that they charge the retailer and not the consumer. This way, they can offer a free service to you and still make a (good) living.

If you think that doesn’t make them a lot of money, know that, for instance, Klarna handled about $80 billion in online sales in one year.

They also charge late fees if you don’t make your payments in time. It’s a great business model that’s been around for a long time, but it’s been propelled to new heights by fintech companies.

Some BNPL companies are also branching out and offering additional products and services that can add to their bottom line as well.

How Big is The BNPL Market?

There are various pieces of research as to how big the Buy Now, Pay Later market is and how big it is going to be. The figures vary widely, and some of them aren’t even close to each other.

What is true is that the BNPL market is worth tens to low hundreds of billions of dollars. It will probably be affected by the coming recession, but afterward, it will skyrocket once again.

By the 2030s, the global Buy Now, Pay Later market is projected to be worth a couple of trillion dollars.

The Buy Now, Pay Later model has a lot going for it, and it’s no wonder it soared in popularity in the US but also worldwide.

It’s not a new concept, but it is pushed heavily by fintech companies, e-commerce stores, and society at large. What’s really driving BNPL apps is consumerism and the need to possess things that we can’t afford at the moment because of social media and instant gratification, among other reasons.